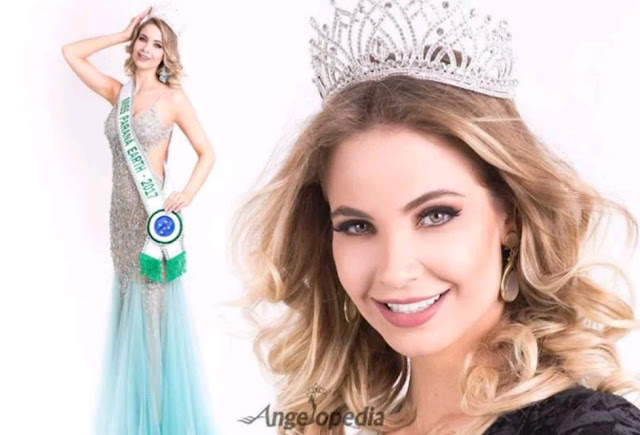 As per the organizers, she has been dethroned because of disagreement on contractual matters and now she will not represent Brazil in Miss Earth 2017. The 22-year old beauty represented Paraná in the Miss Earth Brazil 2017 contest and was the third candidate from Paraná to win the title of Miss Earth Brazil.

As per the Miss Brazil Earth organization’s official statement

“Unfortunately, for contractual matters involving the competition rules, it is not possible for the winner of the contest to represent Brazil in Miss Earth 2017. On this account, the national organization of Miss Brazil Earth, reports about the dismissal of Bruna Vizintin as Miss Brazil Earth 2017.

Have you read it? :  (Another Award?)Queen Jennifer Okechukwu Honored with a Humanitarian award. Photos

Bruna made an outburst statement after she received an e-mail from the Miss Brazil Earth Organization, informing her about the dethronement. She claims to have fully prepared for Miss Earth 2017 as demanded by the organization and has incurred costs for doing so. She further asserted that an agreement was given to her for approval which did not protect her rights, and due to the impasse, the organization straight away deprived her of the title.

As per excerpts from her official statement

“To all who accompany me and support me, I will fight for this not to occur and I will be informing everyone about the progress of this situation.”

As of now, though no replacement has been announced, it is very likely that the first runner-up Cinthia Vieira from Santa Catarina may be crowned the new Miss Earth Brazil and will then represent Brazil in Miss Earth 2017 to be held in Manila.