Miss Tanzanian 2016, Queen Nazil, from Ilala area in Dar es Salaam, was attacked by a gang of robbers last Saturday night after being dropped at home by a friend.
“She had just arrived home after a night out with friends; and when she was waiting for her sister to open the gate, two men on a motorbike ambushed her, demanding she gives them her handbag,” said a friend. 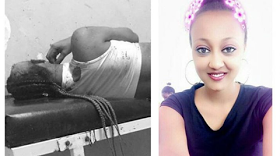 “Since the handbag had her phone, iPhone 6 model, TSh200, 000 (KSh9, 400) and other valuables,the Queen tried to resist, and that is when one member of the gang cut her in the head with a knife. She collapsed, and was left bleeding profusely,”The Tumaini University Third Year Bachelor of Law student was rushed to Dar es Salaam hospital for urgent care. Her friend who made the public notice said she is responding well to treatment.
Let’s hope she come back strong.

Have you read it? :  Most Beautiful Girl in Ansu,Queen Vivian Chizzy Glam in Birthday shoots.