Dethroned Grace Okoro Adaeze Reacts, Tells Her side Of The story.

Few days ago, news of queen Adaeze Okoro who was dethroned by her organization hit the blogosphere which we also covered on modelssphere.

Grace Okoro Adaeze, who was Miss Nollywood Culture and Tourism 2016, has decided to give her own side of the story since her name has been dragged into the mud as she explains that Mr Barakumo Odede, who is the brain behind the sales of the ticket is actually a scammer.

She further disclosed that Barakumo, after picking the girls for camping, wanted to have canal knowledge of each of them as he claims he wanted to have a private interview with them in his room but when it got to her turn, she refused and it became war.
In her words, “One night during camping, Mr Barakumo told us all that he will interview us but it will be privately done in his room. We went in one after the other. I went in when it was my turn and Mr Barakumo was behaving very funny that made me very uncomfortable in that room. Amongst other things, he asked me if I had a boyfriend, and I said yes, and he said that Queens don’t have boyfriends but rich men pays for it. I left the room angrily and upset, I later found out that he asked other contestants for sex too during the one-on-one interview sessions.

Have you read it? :  Pls help vote for a blog reader

“On one faithful night again, Mr Barakumo sent me a text to meet him at the corridor, which I did. But he was not there, then I called him and he asked me to open the next room’s door, when I did, I saw him sitting on a chair with a worried look, “Boss, are you OK? I asked him and he replied “Yes, but I am tired and I need lovemaking from you”. I reminded him of my boyfriend. This word got him angry and he then told me that other contestants were begging for it while he is giving it to me for free and I’m rejecting his offer. He pulled off his clothes and tried to get me down then I slapped him, struggled to get away from him and ran to my room immediately. He later sent me a text that he was sorry that he don’t know what came over him and pleaded that I shouldn’t tell anyone about it.”

Have you read it? :  Checkout Beautiful Photos of Miss Nollywood culture & Tourism Queen Grace Adaeze as she Unveils Her Pet Project.

Grace also disclosed that Barakumo also defrauded her of the sum of about N55,000, her handset Techno T470 and other expenses made.
One Robyn Gawa, who was also alleged to be Grace’s fake manager from information happens to be a peace maker who stepped into the case just to bring peace between the two persons but got a bitter allegations. 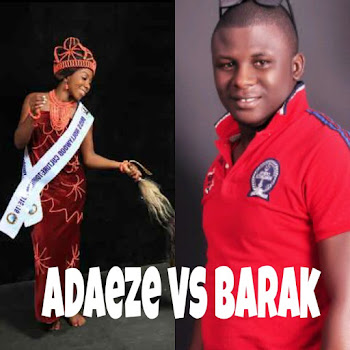