Destiny has a way of playing out in someone ’ s life if pursued vigorously with zeal and determination . Even though good things don ’ t come easy , with perseverance , it would play out . The story of 23 – year – old Miss Jeniffer Okorie , from Ohaozara Local Government Area of Ebonyi State can best be described as that of a determined spirit that never gave up even when limping . She came from a poor background , hawked groundnut , was sexually abused but at present, she wears the tag of a beauty queen .
Okorie started her journey into the home of beauty queens in 2014 , when she won the “Miss Goodluck Nigeria , South – East pageant ” organised by an Abuja based Goodnews organisation . While adorning the Miss Goodluck crown , she declared her interest in helping to stem youth restiveness and violence in the country.

According to her , thuggery, militancy and insurgency are all products of negative orientation , which are propelled by exuberance . As a result of her belief , she started a reach out programme in all the tertiary institutions in the South East , as well as youth organizations and major markets where youths abound . Apart from the outreach programme , she also delved into caring for orphanages and destitute through the provision of welfare packages .

In 2015 , Okorie hyped her status by winning the Most Elegant Model Nigeria and at the moment she is wearing the crown of “ Miss Global Ambassador , Nigeria ” . The pageant , which has a national tag to it held its maiden edition in Port Harcourt, Rivers State on June 24 . Okorie stood out among the 36 contestants to emerge winner and is billed to represent Nigeria in India at the forth coming Miss Global World International Beauty Pageant. In her words : “I was not actually surprised when I was called up as the winner because at some point , I knew I got it.

Have you read it? :  Ankara Styles 2017: Latest and Modern Gowns, Tops, Dresses It wasn ’ t an easy ride because there were a lot of very pretty ladies at the competition but I said to myself , there is something I have that they don ’ t have and because I have been going for pageants , I braved up and faced the task squarely .

“ All the same, I thank God for the strength and courage because I had wanted to give up contesting for beauty pageants last year but my manager pushed me and here I am today wearing another crown ” Though, she is a queen today , she didn ’ t wake up to it or born with a From groundnut hawking to beauty queen She was born and raised in Lagos , where she spent some part of her life hawking groundnuts for survival .
She came from a humble background . But her trip to Awka , Anambra State for a school programme has turned her life around , EBOH , in Awka , tells the story of Jennifer Okorie silver spoon . Okorie went through the thick and thin of life by hawking groundnut in Lagos she was born and bred until the time she sought for admission into the university. 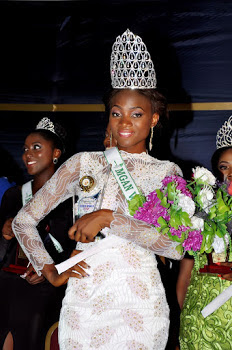 While her mother was a petty trader , her father was also doing menial jobs to keep the family afloat . She , as the first daughter of the family , had to also join to assist her parents and also be able to go to school by hawking groundnut . She said that despite coming from a poor background and living in the slum , she always had her eyes on the prize and was always telling herself that she would be great in life .
With the never – say – never spirit , Queen Jeloy as she is fondly called , took to the advice of a male friend who encouraged her to come to Awka , Anambra State and pick the pre- science form of Nnamdi Azikiwe University Awka , UNIZIK promising to assist her .

Have you read it? :  Top modelling agency revealed..Read details below

It was that transition that transported her through the sour and bitter route of life to the top echelon . She came down to Awka , purchase the pre – science form and was selected for the programme but in the process , the male friend molested and abused her sexually .

As a result of life swords and without anybody to turn to , she had to forgo the admission to pre -science and picked up employment at one of the hotels within the capital city . While working at the hotel, she saved money and rented a room for herself in order to run away from sexual abuse .
Afterwards , she applied for admission into Open University and was offered admission to study Computer Science to which she is in her final year .

Despite the crown on her head , Okorie remains a very amiable and humble fellow , keeping away from every pride that goes with being a beauty queen . In an interview with New Telegaraph , she said , “ I know where I came from and I can never forget . It doesn ’ t make sense to go hyper . I am still Jennifer. Nothing has changed about me; apart from the fact that I won a beauty pageant , nothing has changed .
Pride goes before a fall . I even prefer to hang around the commoners than those in the high class . Someone said to me, ‘ you are a beauty queen , you are supposed to move over to high brow area like Udoka Housing Estate ’ and I laughed so hard and said , ‘ I am at peace and very comfortable living here in the student hostel ’ . I don ’ t want to quit humility no matter the height I get in life because whatever I have achieved was by the grace of God , not man or my personal effort .

Have you read it? :  NewsFlash!!!Meet The 21-Year Old Beauty Queen That Has A Deep Passion For Kids.

When it comes to official assignment , I will be queen but after that , I come down as Jennifer , a onetime groundnut hawker . There is no gain in boasting about who you are or what you have achieved because all of them are vain ” .
As the Miss Global World International Beauty Pageant draws near , Queen Jeloy is
confident that she will not only make her state , Ebonyi , proud , but she will also make Nigeria proud saying that her least expectation is to be amongst the best 10 , out of the over 30 countries billed to participate.